Sometimes all you want to do is check in, clock out and open your eyes a few thousand miles away, away from anything familiar and predictable. And sometimes you want to make the journey itself part of the destination, where the means of getting there itself is part of the excitement. For the former you’d go by plane. For the latter you have a myriad of choices: boat, car, buses, trains.

My choice has always been trains. Maybe I am of the generation that over romanticised summers in European cities with strangers you meet on the Interrail route a-la Jesse and Celine in Before Sunrise.  But also with trains, you minimise effort (no driving), you can move around and stretch your legs as you wish (not like on buses), you don’t get seasick (like on boats).

Plus you get to watch the lives of people as seen through their backyards : where the gardens rot and the old crusty deckchairs count the summers they have left; a life not hidden behind manicured front lawns and postboxes placed slightly askew for that faux-lived-in feel.

Okay maybe that’s not all. My love affair with train journeys (as opposed to trains per se) began a lifetime ago. But that’s another story. This story is about the realisation of a long-held dream: the Paris to Barcelona via rail. Not, of course, on the Ellipsos. No, that would be cheating.

My journey begins in Delft, where my travel companion and partner in various crimes, A, lives.  Delft is a little town – and by little town I mean a ‘little town’ – in South Holland, famed for its pottery, a world-class technical university and Johannes Vermeer [probably not in that order]. Despite being somewhat off the tourist radar, it is well positioned in between Den Haag and Rotterdam, and has direct connections with Amsterdam (by train, of course).

The route we were to take was a modified Paris-Barcelona. Of course in order to do that we had to get to Paris first. So from Delft, we took a train to Rotterdam – a good 13 minutes away that goes past  De Kuip – where there is a direct connection to a Thalys train onwards to Paris.

It was planned in such a way that we would end up in Paris circa midday, have the rest of the day just loitering in Paris, and then take the night train from Paris to Perpignan in the South of France and at the foot of the Pyrenees. From Perpignan we would take a local train to Villefranche Les Bains, in the mountains, to board the Train Jaune – the Yellow Train – which would take us through the mountains through to Le Tour De Carol, on the border between France and Catalunya. From there, a local Rodalies Catalunya train would take us into Barcelona, where the rest of the holiday would begin.

Travelling on trains with connections meant that one was at the mercy of punctualities.  If you live in Britain you will see that these perceived unpunctualities are worked into the system – never do you see a recommendation that you take a train within a five-minute transfer window. But those in mainland Europe seem to have more faith in where their trains end up and when; and so it was with that in mind that there was only a six minute transfer for the Villefranche train once we arrived at Perpignan. The ramifications of missing this train could potentially hamper our plans: at Villefranche there was only one Yellow Train trip that morning: miss that and we’d miss our connection to Barcelona from La Tour de Carol Enveitg; delaying our arrival by at least three hours.

But you quickly learn that this faith is not misplaced, for we got into Perpignan and then Villefranche with many minutes to spare, enough to pose for pictures as we awaited the next train out. Alas, this was not to be, though – we learnt that due to rocks on the tracks the Yellow Train was not running, and instead we would be transported to La Tour De Carol Enveitg via bus instead. A veteran of many a bus replacement service in England, inwardly I groaned. Not only did this blight follow me from Britain to Holland (twice, in one trip!), it now slowly made its way into my holiday plans. 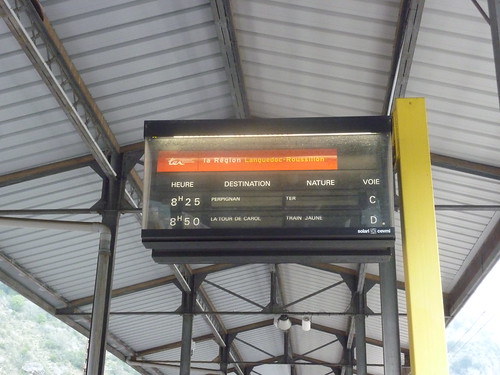 Earlier fears were unfounded though – if bus replacement services were  to be ranked, the one that took us from Villefranche to La Tour de Carol Enveitg would be way up there in the top 5; for it took us through the villages of the Pyrenees-Orientales, through ski resorts and quaint settlements that were as ancient as time itself.

The bus took the same route the train would have – except not on the tracks, of course – and while we missed travelling over the viaducts along the way, we were in an excellent position to capture them, as we did the snow-capped mountains and the breathtaking valleys. Better still, we arrived in La Tour de Carol Enveitg a good 90 minutes ahead of schedule, which meant we could take an earlier train through Catalonia into Barcelona. Never have I been on a bus replacement service that arrived earlier than the train I was meant to be on!

The train ride to Barcelona was largely uneventful – we went through the smaller northern Catalonia villages, many of which looked dead from the windows of the train. Not a sign of life in many towns: not just starkly empty platforms, but  no cars, no one hanging up the washing, no kids bunking off school. The towns looked more like a model city under glass displays than towns with people living in them – which intrigued me.

As the train made way into larger and larger towns en-route to Barcelona, signs of life returned: which I belatedly realise made me sigh with relief – the fear that a zombie apocalypse had arrived in the French-Spain border while I was tucked away in my night train were thankfully unfounded.