The trip to Barcelona necessitated a changeover in Paris, which would have been the case had I been travelling from London or Amsterdam. Seizing this as an opportunity of sorts, we decided that it would be worthwhile to set off from Rotterdam quite early, arrive in Paris by midday, spend the day in the city and then take the night train after sunset.

This works and doesn’t work in two ways.

The panicky connection-missing-phobic-British-resident in me wants to be in a port of departure well before the plane/train/automobile is about to leave, especially when the journey taken is subject to forces out of one’s control (i.e. public transport, especially those susceptible to delays, autumnal leaves on tracks and the odd suicidal Londoner). Being early, however, means you have to find something to do. Which is cheap if you’re in London (with numerous free museums at your fingertips), but not so when you’re in Paris.

As luck would have it – and we were quite lucky this time round – it was a beautiful day in Paris as the train arrived in Gare du Nord, the heavy grey skies that seemed to follow us from Delft to Brussels blown away as soon as the train chugged (okay, whizzed) over the Belgian-French border. This would be my third time in Paris, but the earlier two times were in the midst of winter: once in early December, another in mid-February. I was mildly excited: this was the first time I’d be able to see the French capital in sunshine. Because you know, in these here parts, uninterrupted sunshine transports you not just to another city but another world. 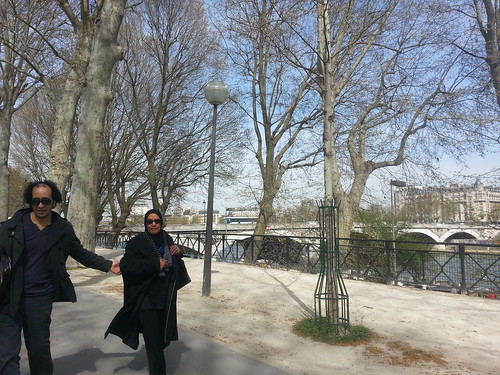 I have never been big on Paris. The Eiffel Tower never drew me, and I was not really keen on seeing neither the Mona Lisa nor the Notre Dame. Honest to God, even to this day I don’t know why. Whilst there I never really noticed the stench [I suspect years of living in JB meant the whiff of the then-uncovered Sungai Segget desensitized my nostrils] but it wasn’t until I read Ernest Hemingway’s A Movable Feast that at least one quarter – the Latin Quarter – came to life for me. Suddenly the back lanes began to have meaning: this was not a city but a village; this was not anonymous, there were people here and lives were being lived amidst the bustle of the sights only mere meters away.

Nonetheless, here I was with about 9 hours to kill on a lovely sunny day in a European city. If all else fails, nothing beats sitting in the sunshine with a book. First things first, though, bags were to be stored at the Gare d’ Austerlitz. This was our point of departure later in the day, and it made sense to park our belongings there before going a-wandering.

Gare d’Austerlitz is the station where the trains towards the France-Spain border leave, and it is just behind the famous Left Bank of the Seine. This allowed for a riverside walk, for which we had no real plans : we just wanted to take a walk in a European city when it was warm! [Our previous European city trips: Budapest, Paris, Granada for me, were done in the dead of winter]. 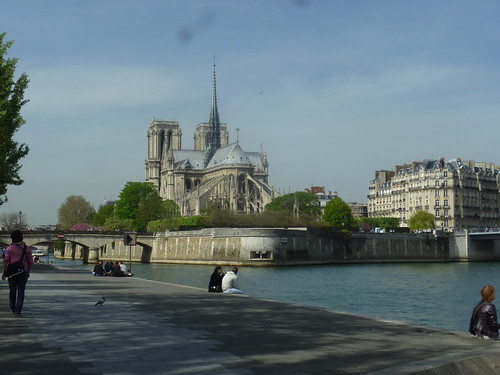 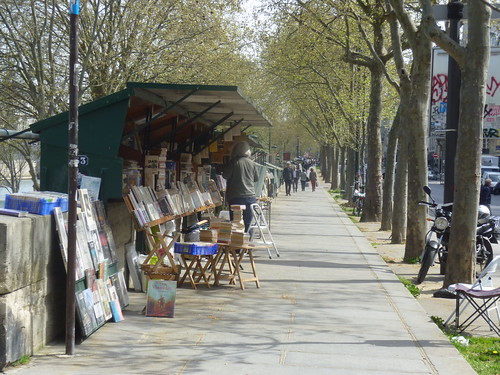 Heading westwards from the Gare by the banks of the Seine, in the far distance we could see the Notre Dame. The banks were quite busy: it was lunch time in Paris, and the unexpected but much welcomed sunshine brought everyone out of their offices and into the streets. It was about 20 degrees, which is summer in my terms.

Just before you arrive at the Notre Dame, you can’t but not miss this: the Pont de l’Archeveche. 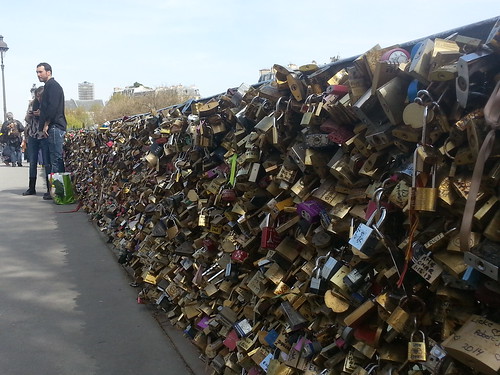 Not for the bridge itself, but for what is locked onto the bridge’s railings on both sides. Countless numbers of padlocks, of a variety of shapes and sizes, adorned with markings [both in pen and inscribed] declaring the love of two parties. In short, a love lock bridge. Not native to France or even Paris, [Malaysia has one in Penang], but befitting perhaps that Paris is often referred to as the city of love.

Interestingly, authorities see these not as adornments of art but that of vandalism [or at best, litter], given the costs associated with removing them. Why do they need to be removed? Because the sheer weight of over 50,000 metal locks [try lifting a box of 50 to get a feel for how heavy they can get] can jeopardise the stability of the bridge. Late last month the Guardian reported of a movement to stop the act in Paris, and responses have been mixed. The idea, of course, is that you padlock your ‘love’, as symbolised by the name of you and a loved one, and then proceed to throw away the key – so that it remains everlasting. Why would anyone need to manifestly affirm their love in such a public way in the hope that it remains eternal beats me [oklah, aku tak romantik laidet] but given the propensity for the authorities to chuck many of these padlocks off the rails… chances are your returning to Paris in 30 years with 3 kids in tow to see where ‘Mummy and Daddy declared their love’ is lower than if you stuck with the old tried and tested method of just vandalising trees. 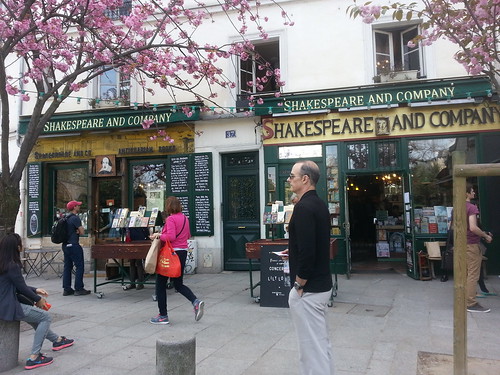 So THIS is what it looks like in summer…

Of course, as one reaches the Notre Dame, you cannot but miss a major landmark in these quarters: the Shakespeare and Company bookshop! One of the most famous English bookshops in the world, perhaps made immortal to my generation by Ethan Hawke and Julie Delpy in Before Sunset, its current reincarnation is really a tribute to the store opened by Sylvia Beach in 1919 and frequented by the likes of Ernest Hemingway and Ford Maddox Ford. This store was opened in 1961 by George Whitman, and was a favourite haunt of a different generation of writers: Ginsberg and Burroughs, among others.

If you are even a mild book lover – or at best a non-book hater – a pilgrimage of sorts to this bookstore is worth your while, especially when you step upstairs into the second floor. I skipped this on this visit, but I have made myself quite comfortable in previous visits: 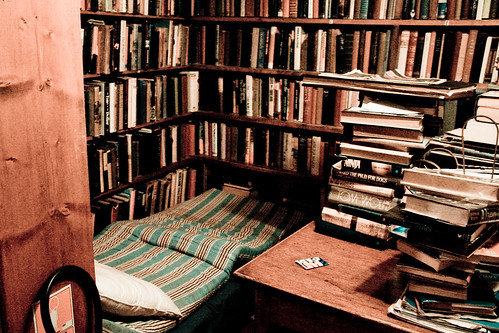 I have been told there are bedrooms there you can rent, but I have neither wanted to stay in Paris long enough nor have been literary enough to explore that any further.

Upon leaving Shakespeare and Company, we treated ourselves to a quick late lunch of crepes and an assortment of savoury fillings, before adjourning to a side-street in the Latin Quarter near the Sorbonne for a spot of coffee and people watching: an event so great it should be an Olympic Sport.

It was almost 5 when we decided on the course of action for the rest of the day: a quick trip to the Trocadero where we ended up soaking the sunrays opposite the one structure we had, earlier in the day, said we would not pay a visit to. 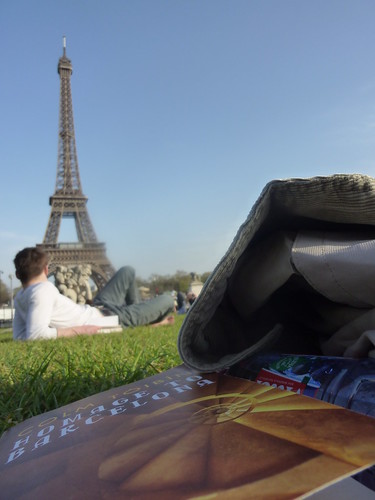 How quickly the sun’s warming rays left us, and the onset of dusk a little after 1900 reminded me that we were still in spring, and the day’s teaser of a summer’s balm was not going to last. It was still 1 April – and the speed with which the temperature dropped made it feel like Paris played an April’s Fool joke – albeit a much welcome one – to its inhabitants and visitors that day.

The plan was to do the evening and night solat before we set off for Perpignan, as the berths we booked for the night journey was a shared berth. We could then have a good dinner at the restaurant before setting off, for we weren’t quite sure when we would next see food! 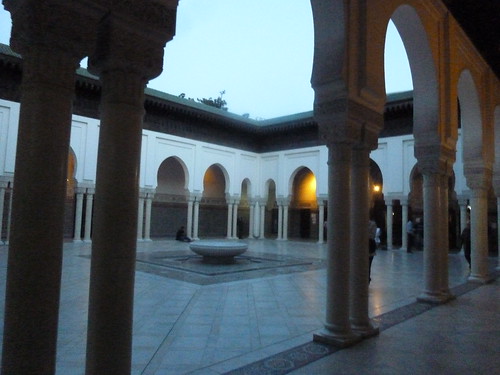 The Grand Mosque of Paris is an interesting building. From the outside, it isn’t unlike the National Museum of Natural History just across the road. It blended well with its surroundings, and looked rather non-descript if you weren’t really looking for it. Inside, however, is a lovely courtyard which opened onto another courtyard, around which the prayer halls were situated. Everything was was made of ceramic tiles – a cool feel to one’s feet after a hot day’s walk around the city – and the fountain in the middle made it a sort of homage to the courtyards of Alhambra. This setting was a nice change from the danky, poorly lit mosques that smelled of mould and poor ventilation in many European cities I have been in, made worse by the absence of a female prayer area. The Grand Mosque of Paris had space for womenfolk in abundance.

Our timing ran off a bit- Maghrib was later than I thought and and forgetting good food cooks slow meant we had to scoff down food rather quickly and then ended up semi-running, in the dark and partially in the wrong direction, to the Gare. Of course, we got there with 20-minutes to spare – but it was 20-minutes a bit too close for me! 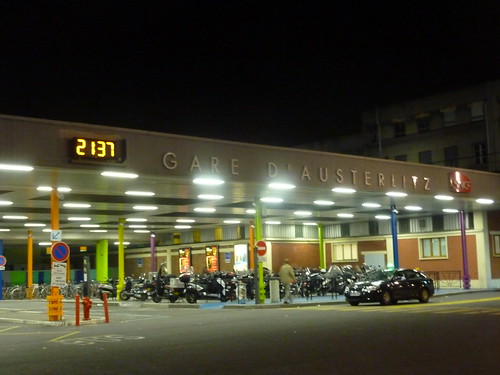 The train we took was one that was headed for Port Bou, which is on the France-Spain border. We were to alight a few stops earlier at Perpignan. The train consisted of carriages that were going to both La Tour de Carol and Port Bou – if you recall my earlier entry, we were to get a connecting RENFE train from La Tour de Carol we wanted to veer ever so slightly off the beaten track. You had to make sure you were in the right carriages and did not go wandering off because at Narbonne, the train split into two before making its merry way to its terminuses. 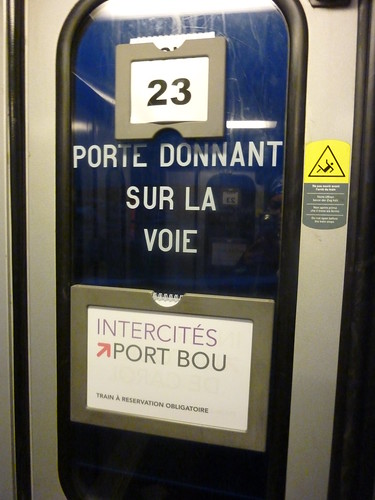 Night trains from Paris – the Lunea – tend to not be too expensive if you book early: our 6-berth couchette cost around 39 euros; the more cost conscious could halve that by sleeping on reclining seats; the more sleep conscious could double the price and get more private berths. Unlike our previous night train from Amsterdam to Munich, this one was less busy – the berth was only half full and no one left or came into our berth throughout the night. 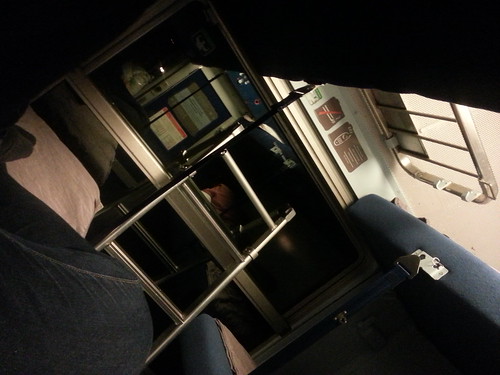 The view – or lack of – in a 6-berth couchette cabin

The downside of taking the night train, though? I missed out on the view. Perhaps next time I could take a daytime leg on this train and sleep over before catching the Yellow Train to LaTour De Carol. Yes, there shall be a next time.

2 thoughts on “Night Train to Spain”