Part 2 of my first trip to Rotterdam in 2008 – part 1 published yesterday.

I pride myself on knowing the rough geography of Europe – and to a limited extent, the world – on two things: a computer game my dad bought for us when I was 7, and football. Heysel was in Belgium, the capital of which is Brussels, I used to chant to myself. Football was how I differentiated by Berns from my Bonns: Bern was the home of Swiss club Young Boys Bern; Bonn, in Germany, had no local football team that play in the higher echelons of European competition. Even today, when meeting new people, a mention of their hometown being Kidderminster automatically places it in the West Midlands, associated with the team Kidderminster Harriers. Yes, the levels of my sadness knows no end in its depth. 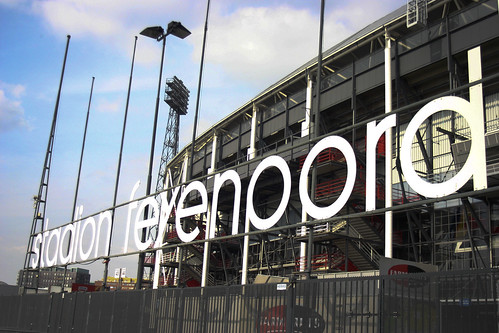 De Kuip, just outside of Rotterdam

And so it was a sly slap in the face for me when I belatedly realised that Rotterdam is perhaps the football capital of Holland. For in April 2008, when I visited, Rotterdam was home to not one but three Eredivisie teams. Fans (and perhaps non-fans alike) are familiar with Feyenoord Rotterdam, who alongside Ajax and PSV, are the original big three of Dutch football. 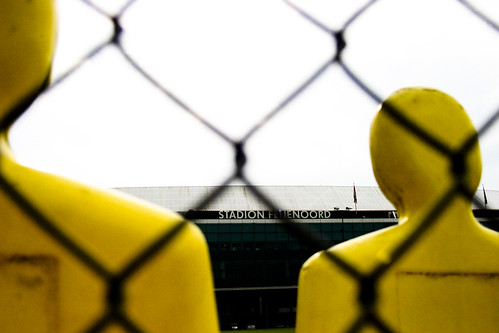 2008 was Feyenoord’s centenary year. Perhaps slightly less illustrious than the other two, nevertheless Feyenoord’s latest European success came early this century (UEFA Cup winners in 2001/02). Notable alumni include one Johan Cruijjf (yes, that one), Ruud Gullit, Henrik Larsson, while former players still in active service elsewhere include Dirk Kuyt, Robin van Persie and Salomon Kalou. Their stadium, the Feyenoord Stadion / De Kuip, is located on the outskirts of the city not far from a retail park and a Pathe cinema (which instantly reminded me of Bolton Wanderer’s Reebok Stadium); the number 23 tram would easily take you there. 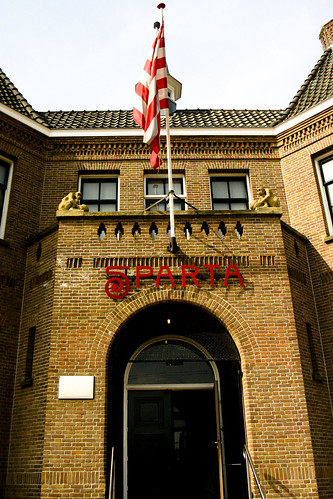 The Manchester City to Feyenoord’s United is Sparta Rotterdam; a club with a longer history, but a lot less successful one. The oldest club in Holland, Sparta play at Het Kastel (the Castle), the last stop on the number 8 tram towards Spangen. Their European history is a lot less illustrious: the furthest they have gone is the quarter-finals of the European Cup where they lost to Glasgow Rangers : in the 1959-60 season. Their most recent foray into European competition was in the 1980’s. However, their alumni list does contain some of the more notable names in Dutch football: Dick Advocaat, Louis van Gaal and err.. Ed de Goey. 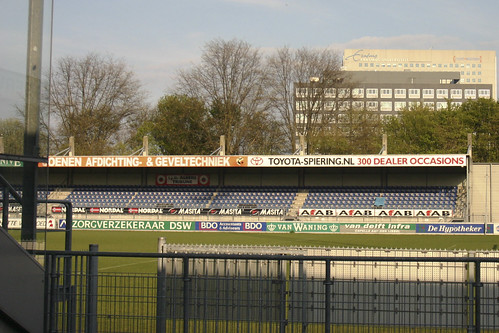 The Woudestein Stadium, with Erasmus University in the background

The third team, Excelsior SV, now (2009) ply their trade in the Eerste Divisie, one below the Eredivisie. Established in the 1930’s, until 2005 Excelsior SV was a satellite club for Feyenoord, which explains why Robin van Persie and Salomon Kaloe are alumni. Other notable members of the old-boys club include George Boateng and Winston Bogarde. Excelsior’s stadium, Woudestein, is not much bigger than Morecambe’s Christie Park at first glance; and with a capacity of 3500, makes it one of the smallest stadiums that I have visited. Tram numbers 1 and 7 take you there, and it being right outside the university where my conference was held made it convenient to visit. 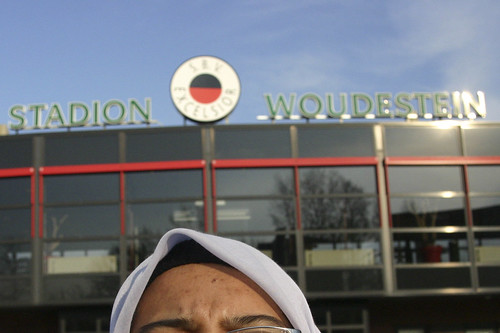 Of the three stadiums, my favourite was Sparta’s Het Kastel, if for nothing else, then it’s accessibility. While I was not able to access the stadium proper, walking around the ground was no problem, and the inside was not totally closed off from view. Feyenoord’s status as a major club and its stadium being part of the De Kuip event management empire meant that most of the club was off-limits, making photography rather hard. Woudestein, being the smallest, was much more accessible, of course, but it lacked character. Het Kastel, in the April sunshine, emanated a feeling of welcomeness.  Had there been tickets for sale, I would have surely paid to watch a game. Alas, at that point, the Dutch Eridivisie season had ended. 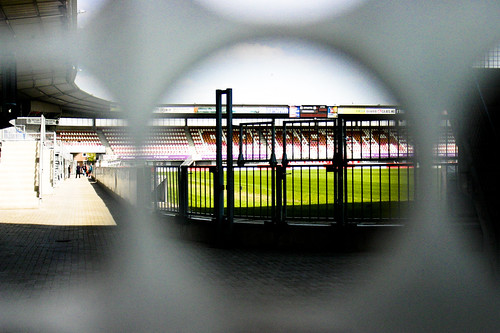 Rotterdam is nothing if not, pardon the cliché, a melting pot of cultures. As with all big European cities, the city centre is often populated by immigrants: recent or not. Locals have upped and left into the suburbs, into postcodes with good schools and back gardens and acacia lined avenues. You are more likely to meet someone of North African, Surinamese or Indonesian descent in the buses, trams and underground metros than you are a local, born and bred Dutchman. Nonetheless, one thing and one thing unites them: and that is the language. You do not hear Arabic spoken here, nor Indonesian. Everyone speaks Dutch, making the guttural ‘g’ sounds that turns Gouda into Ghao-daaa. You hear less English spoken on a London bus. 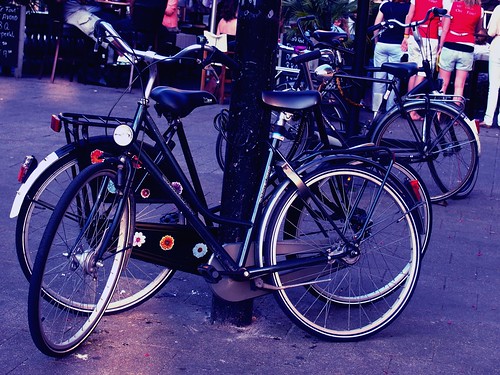 So thanks to the variety of cultures and backgrounds of those who have now settled into this port city, comes the variety in food. Dutch food, per se, is very much uneventful. Save for the syrupy, creamy stroopwafels and piles and piles of cheese in every form and function, I struggled to find anything else that is distinctly Dutch. Peering through the fridge doors at the local supermarket, ready meals tend to consist of bami or nasi goreng: Indonesian fare, really, which very quickly lead me to be reminded of the fact that Britain’s favourite food isn’t fish and chips with mushy peas, but chicken tikka masala. Melting pots are good that way – you adapt and they adopt. 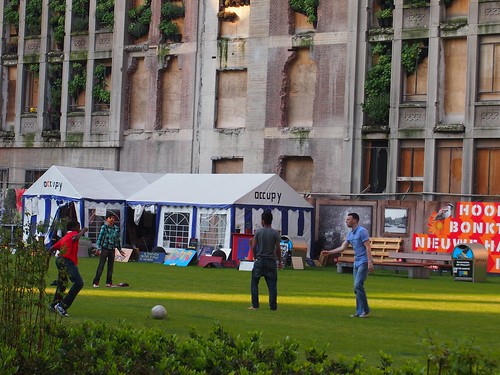 By way of adapting, even as a tourist there is one thing you must very quickly be aware of: oncoming bikes. Cycling is more than a mode of transport in Rotterdam – and the Netherlands in general – it is a way of life. Roads are designed with that in mind. The division of the roads is not just ‘pedestrian vs motorised cars’; it goes three-ways – the middle large lanes for motorised vehicles, a separate lane for bicycles and low-powered motorcyles, and then the pavement for pedestrians. It is tempting, for both the uninitiated and the absent minded, to walk down the cycle paths not realising that this part of the road is not designated for walking, and should the fury of a hundred bicycle bells jolt you out of your daydreams, then the pain of being run over by speeding Dutch cyclists surely will. 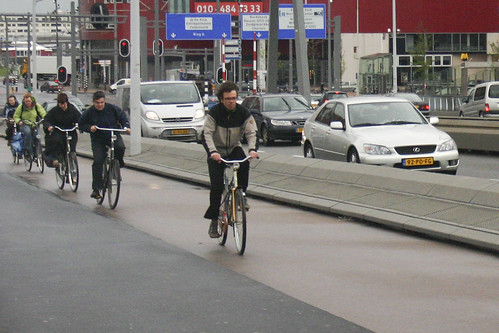 Theroux said, on sightseeing that it is an activity that delights the truly idle because it seems so much like scholarship. This Rotterdam trip may well be proof of that pudding: sightseeing opportunities disguised as ‘academic conferences’ – or ‘scholarship’.

The above article was largely written in 2008 and 2009, and since then I have been back to Rotterdam too many times. I still stand by what I observed as a travelling academic back then.

Some things have changed, of course. The most marked difference, for me, is that Rotterdam is no longer a 3-Eredvisie-team. While Feyenoord continue to be one of Holland’s most successful teams – they are 2nd in the league and on a 5-game winning streak at the time of writing – Sparta Rotterdam left the top tier of Dutch football in 2010 and have yet to make a return. They lounge in 15th place in the same league as where Excelsior SBV, the smallest of the three Rotterdam teams, are currently in third place. This season it looks more likely that Excelsior, and not Sparta, will have a shot at returning to the Eredivisie. There is talk of Feyenoord moving to a new stadium soon, so watching a game at De Kuip has to be made a priority on my next trip that-a-way.

Oh, and might I add: George Boateng, famous Excelsior alum, will be spearheading Kelantan (the Red Warriors) in the upcoming season.