Did you know that as an eight year old, I collected My Little Pony stickers? No? Well, read on…

My dad had very interesting ideas of what constituted being a girl when I was growing up. He was happy for me to help out with rather ‘masculine’ chores: helping putting together a baby cot, for instance; and heavy lifting was never off-limits [within reason for a seven year old]. He was also quite keen for me to pick up on computer programming – then, as is now, very much a male domain.

But he was not very happy about the football.

Football, he decreed, was a male thing and therefore it was improper for me, a girl, to indulge, participate or at times, express more than a passing interest in anything football. I believe this was the root of my passion for the game, for what is more attractive to a child than being told something was off-limits? But also, had I toed the party line, it would have been very hard to avoid the game: growing up in the north-east of England in the 1980s meant that football was the talk of the town in the playgrounds at playtime, and if you couldn’t express an interest in Alison Moyet, this was the only other thing you could really get into.

If football was the language of the playground elite, then the currency of the day were Panini stickers. This was before the heyday of the Premier League, where Division 1 was the top tier of football and live telecasts were shown on the BBC or ITV as Match of the Day or the Big Match respectively, at 3pm no less. No satellite broadcasters interfering with scheduling, so you always knew that at 3pm on Saturday, parked in front of your TV your bottom was [if Abah wasn’t around]. Halcyon days, yes…

Anyhow. On the school playground, at play time (recess is such an American word) boys would group around in circles, taking out their stack of swaps, sometimes so large they needed to be bound by a rubber band or two. “Got that, got that, got that.. ooh need that!” was the mantra as you work through a friend’s pile; they working through yours.

Ideally, you would have found the same number of ‘needs’ from your friend’s pile as they did yours, and therefore, it would be a clean swap: three of yours, for three of mine. But this was also where you learnt about supply and demand, and how whispers and rumours became news that moved the market. You’d find out through the grapevine that Jimmy Messer was three stickers away from completing his sticker book, and that he needed Michael Thomas, which funnily enough Stephen Bell had two of. Stephen, ever enterprising, would then demand five stickers from Jimmy for his one, because he knew Jimmy wanted it bad.

Money never changed hands, though, as far as I could remember, at least not on the playground. I was not privy to what happened after school hours, but in those days we were only allowed to bring 20p to school, which was often spent on toffee at the tuck shop. 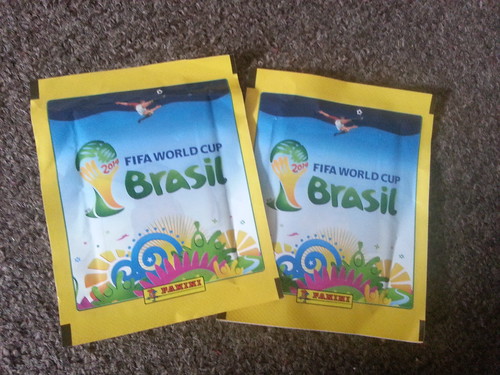 50p a packet these days

Of course, I could only watch from the sidelines, because I wasn’t allowed to partake in swapping football stickers. Happily, my parents were not absolute wretches, of course. They could see that Panini stickers were the order of the day, and I was allowed to also start a collection. Panini were enterprising enough to realise that it wasn’t just football that kids loved, I mean, what about the girls? And so they came out with a My Little Pony collection, which was ladylike and therefore kosher enough for me to collect. And so I did.

We went through the got-got-need ritual too, us My Little Pony sticker collectors. But I always stood around the circle where boys were a-swapping after I’d trader my horsey ones, both curious and also fishing for sympathy. Pity was thrown my way once or twice, when a kindly boy who had too many Clive Allens gave me one for nothing. I didn’t even pretend to be polite by offering him a Peach Blossom sticker. Oh no. I took Clive Allen home, hidden safe in case my dad saw it.

You see, quite a few of the boys knew I liked my football and I also had both a mean right foot and a crushing sliding tackle. Together with another girl, Sarah Clarke, I was allowed to play football with them during playtime when someone brought a ball to school, and this was the happiest time of my life. I could run around, chase a ball, kick it and not risk being told on because my tattletale sister was still in Infant school. So that’s how I learnt about belting a first-timer and sliding in for the ball and not the feet of the opponent, see. But it’s been a while since I saw a football pitch.

Upon returning to England in 2000 – as an adult – it crossed my mind to start collecting the Panini stickers again, especially those of the Premier League. But as a grad student money was tight, and if you had 50p to spend on a cup of soup vs 50p on shiny sticky things, you’d buy the soup. Trust me, the stickers might have nourished my soul but nothing gets you working more efficiently than a nourished belly,

And as studenthood became adulthood and I got a paying job, the concerns of collecting Panini stickers became a four-yearly thing: a World Cup event. I got nowhere in 2006, bought the book and some stickers in 2010 but got distracted because there was a bigger thing during that World Cup year – I got tickets to South Africa! But 2014… this might be my year of the complete sticker book. 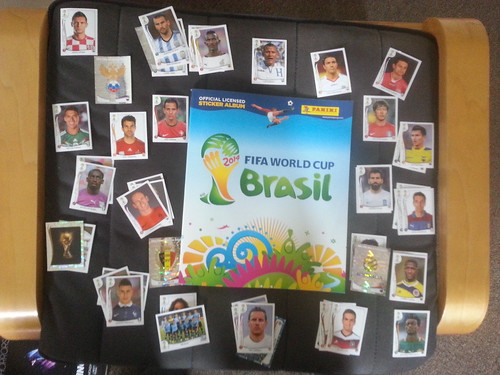 Lining them up before the best bit: sticking them in!

Why? Because this year there are two of us – my brother and I. We are sharing a sticker book, and we have shared the sticker buying duties. Every day each person must buy one pack, so that’s 2 sticker packets a day. 10 packs a week. And it’s over a month before the tournament starts, and it’s a four week tournament. If we keep this up, we may just be able to do it.

The only other thing we need to figure out is how to deal with duplicates – the swaps – in the absence of a playground market to trade in. There are a few schools in the Colchester area, but I think having two 30-something hanging around school playgrounds with things in their trouser pockets is frowned upon these days.

Spare me the lecture on using the money for other things, and instead please stare hard at your Prada handbags and BMW sport rims. I’m a bit obsessed, I know. We all are, aren’t we?

Oh, and that My Little Pony sticker collection? I was three away from finishing the sticker book before Panini stopped selling the stickers, damn them. THREE!

1 thought on “Got Got Need”