Haruki Murakami runs. He’s my hero, and he runs runs runs until he stops. Sometimes that’s over 65km away. Then he goes home and writes about it.

I am not even a runner. I am merely someone who runs. I am someone who has affairs with running, when my other loves are not available. Of late, having lost my badminton partners due to relocation, time spent on court gave way to chasing pavements. I also ran when the football team I played for broke up for summer, and I ran when it got too wet (or cold) to ride. You see, I am one of those people who, unfortunately, can’t get their brains going if their sweat glands haven’t had a workout for a bit. And if I can’t get my fix of games I like, I step out on them and try to tell running I’d like to try and be together again for a while.

As part of the whole running malarkey, I sign up for race events on and off. This is largely motivated by whether my friends join runs or not. There is this weird psyche, see, that I have yet to unpack but I reckon is closely linked with competitiveness – and this state of mind has led me to the state where however much I loath running or however much I see it as a pain, I would, every single time, rather be running than be cheering runners on. Perhaps it isn’t competitiveness, but narcissism – the desire to be cheered on and be the center of attention. I don’t know – like I said, it remains unpacked for the moment. 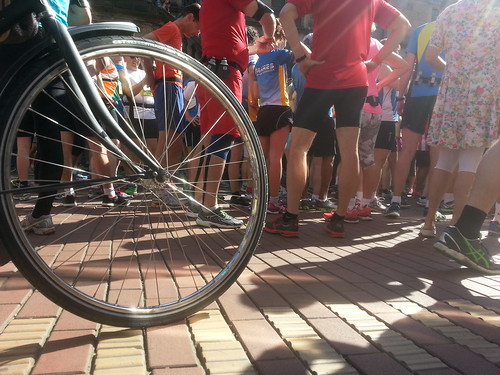 Two weeks ago, I joined my friends who signed up for various denominations of the Leiden Marathon. The Netherlands is fast becoming a favoured running arena – look ma no hills! The longer distances – the full marathon and the half marathon – began earlier on what was to be quite a scorcher of a day, and in between our races we all sat around the finish line cheering on our friends as they completed their distances.

There were, of course, clear winners, with times approaching Mo-Farah-esque levels, who ran marathons at the speed which would take me to run 15km. They are the ones who battle for a podium finish, who set course records and get their face in the papers the next day. Quite rightly, as they finished the course, they did so with two arms up in the air celebrating their glory.

As the day went on, you began to see the runners overlap – that is, half-marathoners finishing later than the full-marathon runners. Initially, I found it amusing that even the stragglers would cross the finish line with a fist pump – because for me crossing the line in 1356th place was no cause for celebration. Me, I would walk very quickly past the cameras (all running events seem to have these of late, designed to capture you at your level worst, sweaty, red-faced and dishevelled) and go find the water stand.

In fact, I cringed sometimes when the celebration of a finisher in nth place would be so elaborate that a bus parade would have seemed modest by comparison. What was the big deal? 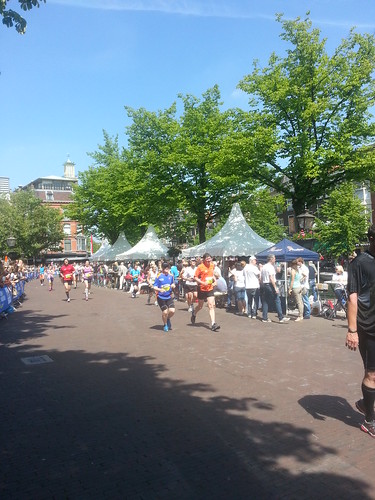 And then I realised that this was my team sport mentality, where in a competition there are always placings, and personal effort count for nothing if you don’t score the goals or get the points. Running, on the other hand, is a very different game. Sure, you run against the two thousand odd people who take the same route as you, who are set off by the same gun as you, who head towards the same finish line as you. But save for an elite few, none of those people are actually racing you, and neither are you racing them. Your racing is one you do against yourself.

You battle the excuses you make because of the elements, be it rain, snow or too much sunshine.

You battle against every single ounce of wanting to give up, not just on the day but every training day leading up to the race.

You battle against muscles that creak, lungs that labour, feet that blister.

You battle the chants of “fuck it fuck it I want to stop”.

You battle your worst enemy – yourself, your insecurities, your lack of faith and belief in your own abilities.

And the prize for winning that battle is crossing that finish line – an hour, two, four hours later. The triumph you feel isn’t because you beat someone else. It’s because you beat yourself. And if you haven’t done that for yourself, then you’ll probably never understand that fist pump, that whoop of joy, that mental bus parade you envision inside your head as you make it to the end.