There is this whole thing about making new changes in the new year and all that. Mine was completely incidental, and if I were to do it again, I’d never make a move in the New Year.

For pragmatic reasons, that is: it means moving to a new place in the dead of winter, over the Christmas period when working hours are limited and you are disinclined to push for anything too hard given the festive period. I’d hate to be Ebenezer to a poor Bob toiling away at Pickford’s.

And so, as many have been made aware, after nine years and three months, I have left the quaint old town of Colchester for larger, if not necessarily greener, pastures. [I don’t believe there are pastures that are greener than others: they can all be green if you water them probably].

There has been a progression in terms of size, for me: my first adult abode here was in Lancaster, which was so tiny we didn’t have a chain cinema until 2006 [which was a good thing!]; and then Colchester which was big enough to have a Debenhams but probably not a John Lewis. 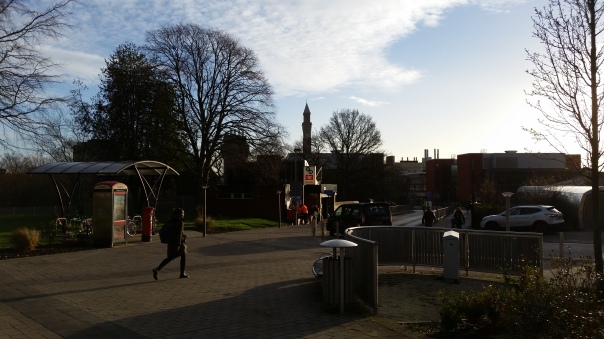 Like shops that shutat 8pm and not 5pm.
The existence of a night life revolving around culture rather than getting drunk.
Like having an airport that is 30 minutes away, and not 2 hours and 30 minutes.

And the non-perks, of course. Higher crime rates. Gun crime in the city. A bigger target on the terrorist radar – one can’t discount this, these days.

I am a tad sad at leaving a place I called home for almost a decade. But things were getting stagnant and I needed something new to stay interested. There are clear comforts of familiarity that I sorely miss. I am trying hard to balance that with the excitement of discovering the new.

And six days in, I am excited enough to restart an old, much ignored pasttime: writing. Because suddenly, there are things to write about. Stay tuned.